The SF Bay Area type-in is a go 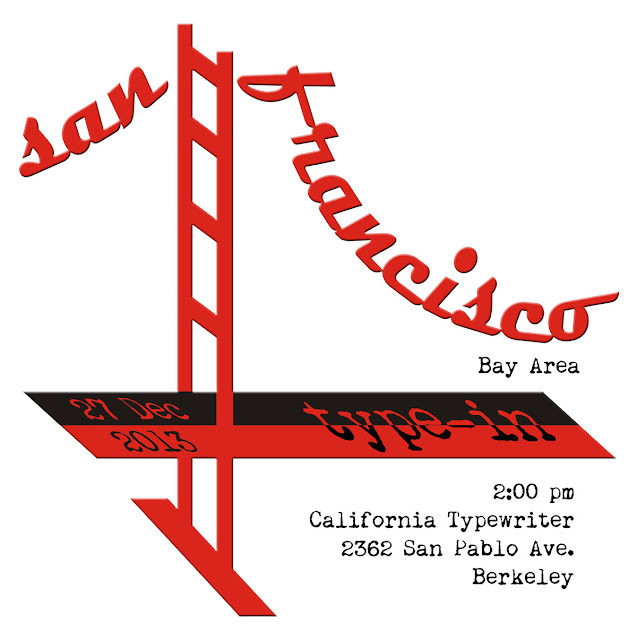 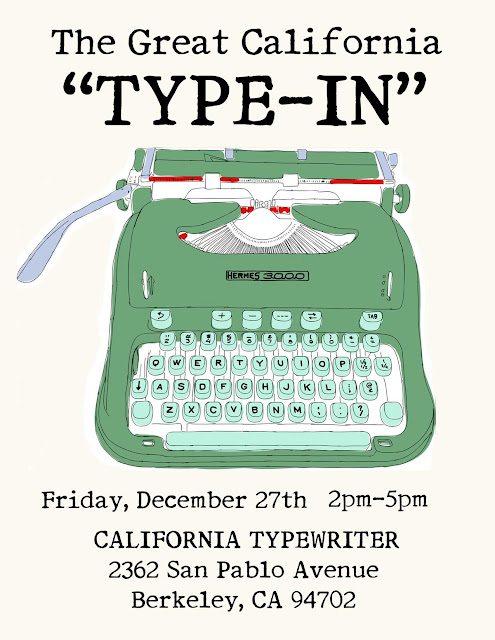 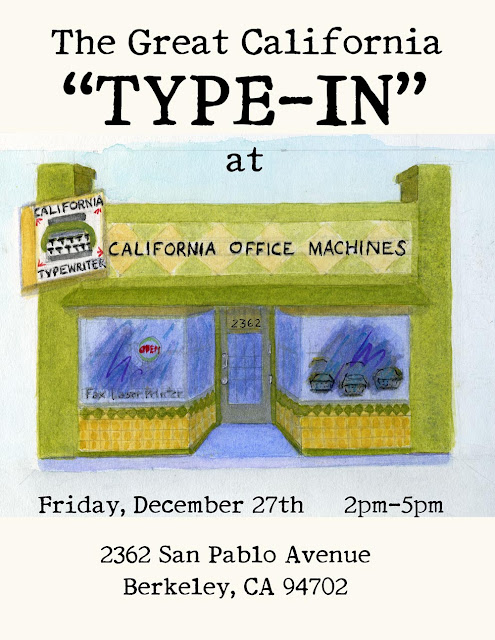 Thanks to ZetiX and California Typewriter for the graphics!
Posted by Richard P at 6:48 PM 3 comments:

I am an old book troglodyte
one who composes on paper
and types up the result
as many times as need be.
The computer scares me,
its crashes and codes,
its links with spies and gunshot,
its text that looks pre-published
and perhaps has been.
I don’t know who is reading
what I write on a carriage
that doesn’t move or ding.
I trust the spoor of botch,
whiteouts where thought deepened,
wise freedom from Spell Check,
sheets to sell the National Library.
I fear the lore
of that baleful misstruck key
that fills a whiskered screen
with a writhe of child pornography
and the doors smashing in
and the cops handcuffing me
to a gristlier video culture
coralline in an ever colder sea.

Source (shared by Bryan Sherwood)
Posted by Richard P at 7:24 AM 5 comments:

The Typosphere's own Richard Polt is arranging a post-Christmas type-in for those in or around the San Francisco Bay Area, on Friday, December 27. Details are slowly coming together via email. Currently we're discussing something in Berkeley-ish territories, though nothing is fixed yet regarding specific time or place. We haven't even managed a snazzy graphic yet -- anyone handy with that sort of thing?

There's a rumor that participants might be involved in another documentary, too. Heck, I might even spring for a haircut in a vague attempt to look respectable (but let's not get our hopes up.)

Richard has posted a not-so-secret note about it on his blog and on the Yahoo groups, too.

UPDATE: the type-in is at 2 pm on the 27th at California Typewriter.
Posted by mpclemens at 7:55 AM 1 comment:

This isn't really that useful, but it's fun to see where our favorite typewriters were built. I've been working on this in Google Map Engine over the past few days and currently have 69 factories marked on the map across 5 continents. I've gathered my information mainly from Will Davis's Portable Typewriter Reference and Robert Messenger's oz.Typewriter. My current goal with this map is to mark the location of every typewriter factory that was producing any decent quantity of machines during the 20th century. I'm not counting factories where typewriters were assembled from parts made in another factory, like the British-built Remingtons. It's better to view it in Google Maps Engine.

There are three fields to each point on the map--manufacturer (and model if the manufacturer is not immediately recognizable), location, and year production began there. If you notice any errors or want to add more information to the map, I can add you as an editing user if you have a Google account. (contact: schreibstang at gmail dot com)

Was the Brazilian-made Hermes Baby built at the Olivetti's São Paulo factory?

Full version in Google Maps Engine
Posted by Unknown at 11:28 AM 9 comments:

What Does the Rhino Say?

Another NaNoWriMo is in the box/bag/container of your choice and the Typewriter Brigade came out in force this year with typebars swinging. For the stats wonks in the room, here's NaNoWriMo 2013, by the numbers. Remember that the Brigade has an open-door policy to membership, mainly because the Rhino ate the door. If you so much as look at the topic, you're considered a Brigadier for the year.

All figures are as of December 6, 2013, as of my highly-scientific copy-and-paste of the forum text...
Personally, I think that last stat is a little wrong, since you're all winners in my book. Trying to squeeze the time and motivation to draft a novel in a month is challenge enough. Rocking it old school automatically wins you non-redeemable Bonus Points. In short:

For more than a few of us in the 'sphere, the Brigade was the gateway drug to getting into typewriters and retrotech in general, and despite the cries of "hipster!" and the usual level of mockery and disbelief that Brigadiers had to face this year, I'd say we kicked some serious rhino hindquarters. Same time next year? 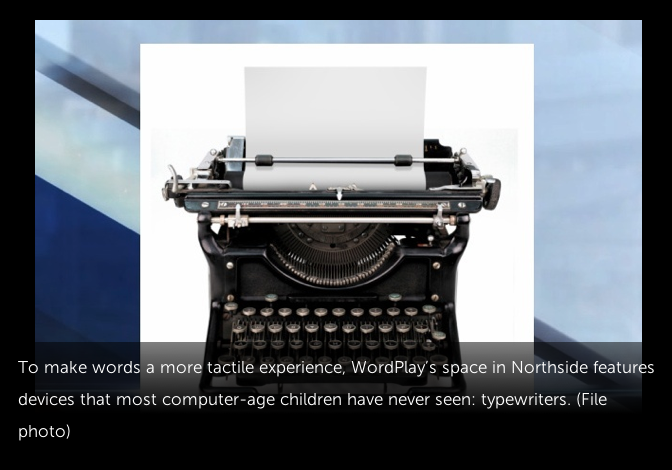 A new organization that aims to enchant Cincinnati youngsters with the power of the written word launched a fanciful fundraiser Dec. 1 with the help of local and national authors. ... WordPlay asked 20 authors “to contribute a previously unknown fact about a legendary animal,” such as a jackalope or a mermaid. “They have to write this fact on a physical object – a canvas, a bus ticket, a map – to create a unique work of art, with the authors expressing their creativity in a new way,” she explained. The objects will be sold at online auction, and all proceeds will go to WordPlay. ...

To make words a more tactile experience, WordPlay’s space features devices that most computer-age children have never seen: typewriters. ... “They actually fight over who’s going to get to use them. They think they’re the coolest thing ever. The experience at WordPlay makes writing cool, so to speak. It’s where the kids are learning that writing is not just an assignment; it’s a self-expression.”

The whole story is here, including a video in which WordPlay's director tells the story of the organization. As many typospherians know, I volunteer as WordPlay's typewriter guy, but it's much bigger than typewriters.

And here are the eBay auctions for this unique fundraiser.