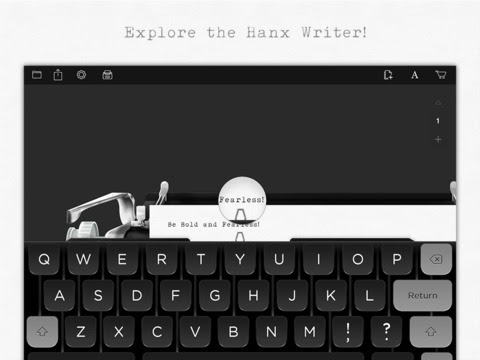 Update: it's currently number one in the Apple App Store. Commenter Mark Adams (Type-Writer.org) did a screencast and posted it on YouTube. Joe Van Cleve has been trying the Hanx Writer "in the field" by producing typecasts: his review is in three parts so far: part 1, part 2, and part 3.
Posted by mpclemens at 4:28 PM

Thanks for alerting us!

I see that it's featured on the App Store and is getting a lot of press. I downloaded it (it's free, but you have to pay if you want different styles of typewriter, colored ribbon, etc.).

It's cute, but not necessarily better than miTypewriter. It is a 3-bank keyboard on screen, which is of course pretty awkward -- but Hanks recommends connecting it to an external, real keyboard for a serious writing experience. (And of course, that keyboard could be a USB Typewriter.) You can decide whether backspace should delete, or whether it should X things out. (There is a glitch here, or at least an awkward feature: when you X things out, the X'd-over part stays in front of the cursor unless you tap the screen to move the cursor after the X's.)

My impression so far: the app is charming, and possibly a good way of promoting the insurgency, but it sure ain't as good as a real typewriter, as I'm sure Tom would agree.

It also highlights the short lifespan of the current gadgets - as I have 1st generation iPad I can't use this app as it needs the latest iOS (7). The device still works fine but the updates of the operating system stopped after only THREE years...

Hmmm... this puts me in the mind of an app challenge: what low-distraction writing applications work well? I can see this being high on novelty and low(er) on utility.

Interesting comment on the compatibility with older OS', @ZetiX. I suppose it's a good thing nobody ever figured out how to make Underwood paper incompatible with Remingtons.

@Mike: For use with the iPad, I keep touting the iAWriter app, mainly because its virtual keyboard is a step or two above the default iOS keyboard, offering an extra row of keys on top for punctuation and cursor movement commands. The app outputs an unformatted text file only, saves to the iCloud if desired, but makes it handy for first-draft writing which can then be copy/pasted into almost any other output mode, whether that be browser or word processor.