Typewriters featured in a short video about NYC

rEVOLution from EFT Harmony on Vimeo.

Featuring typewriters made available by Rob Neuwirth and Andrea Haenggi at Occupy Wall Street a couple of weeks ago.
Posted by Richard P at 1:43 PM 3 comments:

Even though other typospherians have covered the issue better than I ever could, I thought I'd share some cinematic examples of mechanical writing machines. Mild spoilers, typewriter violence, and bad screencaps ahoy. You have been warned.

Our first example is found in the 2011 film, The Help. The glimpse is but fleeting, allowing yours truly to acquire little more than a hasty snap, but that Royal portable is there all the same.


Next up is the 2001 film, He Died with a Felafel in His Hand. Tough to describe this one, but try to imagine if Clerks and Trainspotting had a baby. In Australia. Professional weird-looking guy Noah Taylor plays a distracted and disenfranchised writer who just so happens to have a penchant for Kerouac.

Of course, HDwaFiHH is not all sunshine and roses. After a particularly disheartening event, Taylor's character does something...drastic.

Next is 2011's The Rum Diary by noted typewriter-user and stark-raving lunatic Hunter S. Thompson. I neglected to take any screens while I was watching it, so these images are courtesy of the 'tubes. Note also that Depp's character, Kemp, uses a Nakajima typewriter, which wasn't even available at the time (thanks to ozTypewriter for the info on that one). Still, several Royals are seen in the film, so I'm gonna give it credit.

Last and certainly not least we have 2009's Paper Man, starring Jeff Daniels and – once again – Emma Stone. DO NOT JUDGE ME, INTERNET. Kind of a weird flick, it features a SCM Electra pretty prominently.


Like Felafel, unfortunately Paper Man too indulges in scribeosadism when Daniels' character, in fit of...something pries the H key off the poor machine and promptly loses it for the rest of the film.

Email ThisBlogThis!Share to TwitterShare to FacebookShare to Pinterest
Labels: he died with a felafel in his hand, paper man, the help, the rum diary, typewriters in film, unhealthy amount of emma stone references

A Denver TV news show has devoted five precious minutes to the typewriter revival. They gush over a cursive Smith-Corona and show a local repairman.

Typewriters "taking the country by storm"? 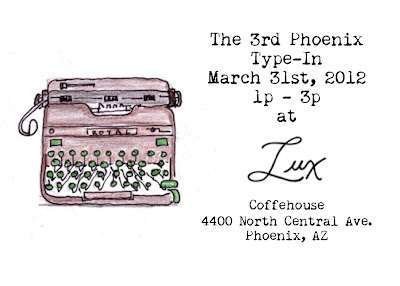 Maybe well-timed, considering the recent movie trailer for On the Road, but Maya Stein is going to head out with a bike and a typewriter and a head full of poetry and trace a route that looks like it's going to come within shouting distance of many in the Typosphere.

She's got a Kickstarter page up about the project. Anyone out there in Ohio, Michigan, Indiana, Illinois, or Wisconsin? (That's a silly question: of course there are.)
Posted by mpclemens at 9:24 AM 4 comments:

Email ThisBlogThis!Share to TwitterShare to FacebookShare to Pinterest
Labels: around the typosphere, in the news

A sale on March 16-17 in San Pedro, CA includes lots of typewriters, especially postwar office machines but also plenty of portables and some older machines (such as an Oliver 9). I expect it will be a good chance to get an affordable Selectric, KMM, SG3, or other excellent writing machine.

Go to this page and scroll through the photos until you start hitting the typewriters.

Right now they don't provide any details on exactly where and when the sale is. But you can send them an e-mail through their site, or visit them on Facebook.
Posted by Richard P at 7:30 PM 4 comments:

"On the Road" trailer

This trailer for "On the Road" prominently features Kerouac's Underwood portable and his famous continuous roll of paper.

You can read my story about typewriter collecting and the typosphere in the latest issue of Antiques & Auction News:

Future definition of a typewriter

William Pannapacker has written a great article on typewriting that appears in the Chronicle of Higher Education, and with his permission I've also added it to my collection of "Typewriter Tributes."

Here I wanted to share one of the readers' comments on his article, which I think is perfect. (I fixed a few typos.)

We really aren't old until the definition of a typewriter becomes:

The typewriter was a device used back in the 20th century that printed characters one at a time as the keys were pressed on its keyboard onto a storage device known as paper, which was highly susceptible to fire and could not easily be shared with more than one other unless additional copies were made using a labor or machine-intensive process. Some advanced typewriters used electricity and had the ability to delete single characters at a time but older versions did not require electricity and could only have corrections made by applying a white liquid to the paper called "correction fluid" to cover up the errors, thus destroying the audit trail. In the latter half of the 20th century, the computer made such devices obsolete except for their use on equally obsolete forms that had a crude copying technology called "carbon paper". Carbon paper allowed individuals to simultaneously copy material onto multiple pages without the use of the now ubiquitous photocopier. When corrections were made using carbon paper, the carbon paper required the use of an eraser. The eraser was a correction device found at the end of another obsolete device known as the pencil. A pencil allowed people to make corrections by rubbing against paper, thus lifting the graphite impression left in the paper by the pencil. Luckily, these indentations were usually still present, allowing individuals to view the audit trail. However, this ability to correct is, of course, a defect since the audit trail is obfuscated. In any case, all of these technologies suffered from the defect that it was impossible to exactly determine who had actually written the documents in question. Thus in order to achieve proper identification people used another device called a pen to "sign their names" using an archaic process called "cursive writing", which no one really understands or uses now that biometric chips instantly transmit identification signals onto all transmissions. Correction fluid was needed to eliminate errors when pen was put to paper, which again destroyed the audit trail. However, the bigger problem was that names were not automatically attached exclusively to one individual. It is reported that the number of individuals with the moniker of "John Smith" may have exceeded one million. This made tracing the originator of the documents very difficult. The solution was that each signature was supposed to be unique but inventions like the "autopen" destroyed this reliability. The typewriter was replaced with the ancestor of the biometric chip called a computer. It had the nasty habit of rebooting spontaneously without warning, which led many to decide to stick to the older technology. Only with the passage of legislation mandating biometric chips in all individuals did we achieve the elimination of all of this environmentally wasteful material. Now we instantly transmit all information and thought to all individuals around the world using our advanced biometric devices. This has the additional advantage of allowing governments to instantly detect subversive content, know exactly who has said what, and require individuals to attend reeducation camps to ensure that they are fully in compliance with all regulations concerning attitudes and belief systems.