This is the cover of today's New York Times Magazine. 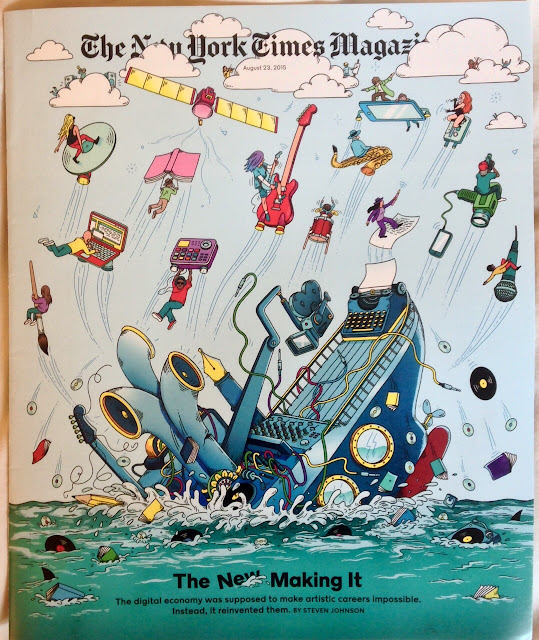 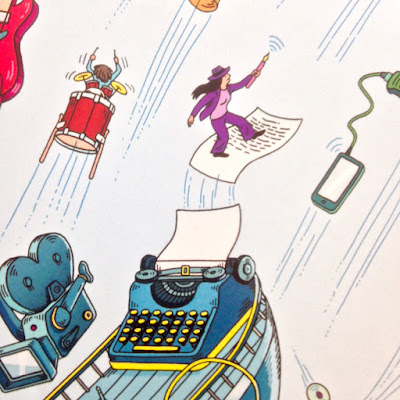 A few observations on this fine illustration by Andrew Rae:

It's interesting that typewriters get such a prominent role as representatives of non-digital creativity, and as the device that is apparently going to be the last to sink. Weren't they already "sunk" circa 1985? Perhaps against the artist's intent, the illustration shows that typewriters aren't dead.

There are many people who haven't thrown away their analog devices, and are combining them with the digital in creative ways. Case in point: typospherians. Maybe this point is conveyed by the writer who's surfing on a typewritten sheet, wielding her fountain pen.

The article itself ("The Creative Apocalypse That Wasn't," by Steven Johnson) presents a somewhat reassuring view of the ability of artists to support themselves in the digital age. There's some encouraging news, such as the recent growth in independent bookstores, but the author's spin strikes me as overly optimistic. A sad truth is buried in the next-to-last paragraph: "Most full-time artists barely make enough money to pay the bills."


PS: Read typecaster Patrick Wang's analysis of the fallacies in Johnson's article.
Posted by Richard P at 7:34 AM

I think as the pitfalls of digital technology have been documented more and more, the virtues of analog machines are increasing in appeal.

The whole digital for creativity will soon be full circle as more and more people are discovering the truth about digital and its poor quality as well as it is controlled by someone else.
I like the article, but the demise of the music industry as it was is due more to the fact of not selling what listeners want. Ever try to buy your favorite recording only to be told it is out of circulation and never to be found again. In many ways the only way a person could get a specific record was through the file sharing places that are now shut down. Had the recoding companies started a service like Itunes they might still be going strong. I'm thankful for the streaming services that do not kiss-up to many of the programmers and play music not heard on radio. Radio will fade into the great abyss before long too if they (all the different radio stations of which many are owned by the same money hungry conglomerate) do not play what people want instead of all the same thing. I've been in broadcasting over 30 years and the way things have gone in the past 10 I'm happy I have or had been in broadcasting -- it is only a shadow of what it once was.
Remember once every car and every device has connectivity the government or hackers can shut it down.

Somehow I don't think those people in the cloud are safe from sharks.

Thank you for sharing this very well written article with us. The digital technology, for all its advantages and pitfalls, has brought some really revolutionary changes, especially when it comes to movie, photography, music and writing. Now, people with simple digital camera can shoot a movie and then work on software to make it look professional and same is the case with digital photography, though I consider both digital movies and digital photography, as inexpensive mediums to hone one's skills. But the biggest advantage, that digital technology has heaped on us and we should be thankful to it, is in the music and writing field. Not only, new artists can make music and release them, without being subservient to the honchos of the music industry but digital format of music has also made available thousands of unknown gems of music that have been "out of print" for many years, thereby enabling people to appreciate music from a different era without having to worry about the medium (LP/Vinyl, Cassette, CD etc). As everyone else, I will forever be thankful to the digital technology that I was able to discover music long out of print and long forgotten by the people. The ripple effect of music available in digital format is, that not only the new artists can debut independently of the record labels but it has also forced established musicians to actually work for their living. In the days gone by, elite musicians, bands seldom toured but now, with the sales of CDs going down and revenues plummeting, they are actually forced to "perform" as in front of an audience. Now, releasing an album is just like a successful "job" interview, the real work starts after it has been released.

Similar things have happened in the field of writing, be it fictional or factual writing on serious subjects.In spite of my personal preference for printed paper books over ebooks, I think this has had the same effect as it had in the other fields. Perhaps, in near future, the publishing industry will have technology and the means to publish works in whatever format the user wants, like say selecting songs from catalog of various artistes and getting it pressed on vinyl record or CD. Getting a book in electronic as well as printed book format or the film directors/photographers having a choice to shoot in digital or film medium.

The publishing industry is already often able to provide books in whatever medium the user prefers. Long out-of-print books, or books with a very specialized audience, can be printed on demand quite quickly or delivered electronically. There are obvious benefits to this system.

Can't tell you how many times we've seen the manual typewriter announced as "dead," only to discover another marketing attempt in the United States. Presently Royal is offering a manual portable typewriter brand new through its website, proving that these machines aren't quite finished yet. Thanks for sharing this piece.