The results of the first Round Ribbon to be completed: 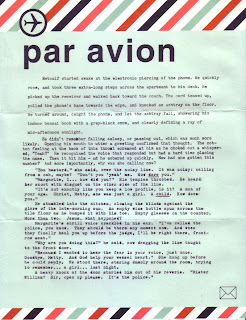 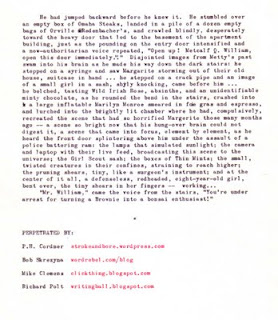 wtf? how do you people come up with this?

Ha! Great ending, Richard. I knew you'd figure something out.

That poor, poor girl. She never stood a chance!

So, let's just say somebody maybe was supposed to be sending something to somebody else - just as a hypothetical - and say that person has been delinquent. Should that person go ahead now - at this late date - go ahead and send something? Just curious.

Speaking purely in hypotheticals, this Round Ribbon languished with me for a few weeks before I sent it along. I personally think it's better to be tardy than to suffer the potential public shaming of a post on the well-trafficked and highly-admired Typosphere site.

It was so clear, where that was going... and then it didn't. Bravo, fellows.

Oh, and but by the way: Polt is one twisted dude. Well done, all of y'uns.

I didn't get in before the first cut, but I'm certainly up for the next round!

That's pretty cool. I want to do it if another one gets started up.